“Are photo booths a fad?” is a question that comes up often.

I always reply “of course not!” That’s been my opinion — but I’m biased perhaps because the photo booth business has changed my DJ Business.

But now I’m going to use actual data and industry info to come to the same conclusion.

Anecdotally I can tell you that in late 2014, my wife Diana and I noticed that our DJ company clients were asking for photo booths.

We responded to the demand and started with one photo booth — a DIY job (we bought the computer, touch screen, camera, and software) and spent about $3,000 to make the first one. It was big and bulky, and tough to lug around. It got easier and cheaper as we made more.

We were able to make more money at the DJ events that we were already booked for. It was an easy upsell, and we began to make more profits per event — on average about $350 – $500 more. We made our investment back within a few months.

Photo Booths Became Popular
Within one year of starting to offer photo booths, we were getting more inquiries than we could handle. (I do SEO for our website, so the leads were from inbound marketing). We then invested in two more photo booths and hired more staff — we could hire people and train them pretty easily. We also made more profits, since we provided all of the equipment (unlike the DJs we hire who must have their own professional equipment).

Currently, we’ve had weekends where we had more photo booths than DJs booked. On a busy weekend, we can do up to 10 events in a day. Let’s look at the numbers and see the current state of the demand for photo booths. 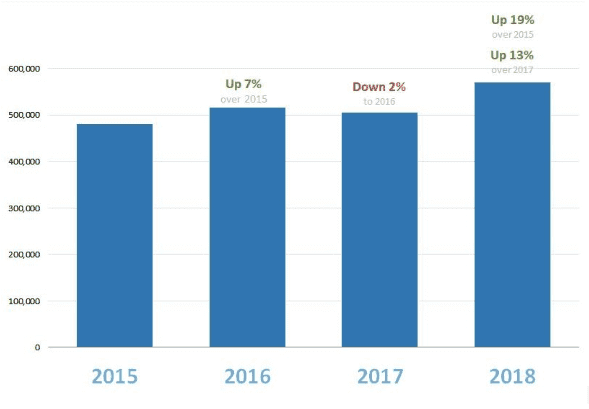 The above photo was taken from Prostarra’s article. We can see that photo booth rental searches have gone up every year.

Next, let’s look at a photo from Google Trends. This data is from an article from TheRinger.com about photo booths. The year range is from 2004 – December 2018. The trend shows photo booth searches overtaking DJ searches! I found this surprising. I will say that it may be a little skewed, since they only accounted for “wedding DJs.” It would have been more accurate to search for wedding photo booth rentals vs wedding DJs. So, l decided to do a more accurate search comparison. 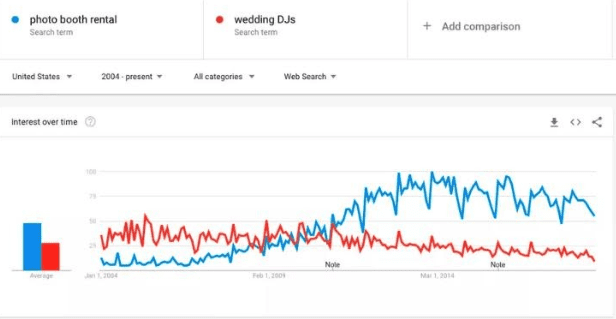 Below are screenshots of the data using Google Ads. I compared “photo booth rental near me,” to “dj near me,” and other search terms. This is using the entire US location. I don’t like Google’s keyword planner since it just gives you a range. However, as you can see, the range is EXACTLY the same. 5 years ago, we were booking about 1 photo booth for every 5 events. Now, it’s almost 100% of our events. The data, below, shows that the searches are equivalent.

Since the photos literally have different data, I decided to take my research a step further and use SEM Rush data, which is very accurate. I did this research on January 22, 2020. I used the same search terms and here is what the data showed. The first picture is for the DJ search related terms.

Why does “photo booth rental” get so many searches? My best guess would be that there are far fewer photo booth rental companies than DJs. Just in our Austin, TX market, there are nearly 200 DJ companies advertising on the wedding websites, and hundreds more solo DJs. Basically, it’s pretty easy to find a DJ, and it seems like everyone knows someone who is a DJ. The market is saturated.

That’s not the case with photo booth companies. It’s a newer market, with fewer well-known players, and the greater number of searches reflects that.

Where is the Photo Booth business going?
As with all things in the entertainment business, photo booths have evolved too. The booths have gotten smaller, more compact, and easier to use. They’re now easy to set up and can fit in any regular-sized car. This makes it easier for us to hire photo booth staff.

Photo booths can now do videos, gifs, green screen, slow motion and much more — all of which have kept them in high demand. Indeed, photo booths will get smaller and in larger numbers are evolving along with the iPad. iPads now occupy a whole new subset of photo booths — you can now share your photo instantly to social media and email directly, which appeals to the younger crowd. As the iPad’s cameras get better you’ll see that side grow as the entry point is lowered for DJs to begin offering photo booth services.

Overall, to answer the “are photo booths a fad” question, the data shows that no, they are not a fad. In fact, as tech gets better you’ll see growth, as it gets easier and more cost effective to produce higher resolution photos. There are some cutting edge companies out there already doing amazing VR and immersive photo experiences — check out L.A. Photo Party, David Holbrath from Booth Masters, Mike Bender from Mobibooth, a leader in the iPad style booth, and Danny Brewer from Ring Roamer for his mobile handheld iPad booth.

Currently popular for our photo booth business in Austin is the open-air photo booth, which is much smaller and compact. We do still offer the traditional, enclosed photo booths, but the open-air booths are far more popular.

The customer speaks — and we’ll continue to listen. Won’t you?

Jason Rubio and his wife Diana opened Austin’s Best DJs & Photo Booths in Austin, Texas eight years ago. However, the couple have been DJs far longer than that — when they first met, they had no idea the other was a DJ. 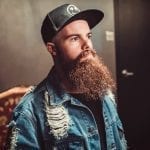 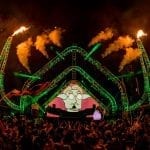