When it comes to the wild world of deadmau5’s mau5trap imprint, ATTLAS is one name that needs no introduction to its community because not only is he one of the imprint’s most celebrated artists, he was the label’s first-ever signee!

After much anticipation after honing his craft as an electronic producer for over four years, the Canadian talent unveiled his 10-track debut album Lavender God which serves as a musical journey sharing his deeply personal story while showcasing his impeccable technical talent as a producer.

Considered a true production prodigy early on, he’s continued to evolve as a producer with each and every release. After leaving the electronic community in awe following the release of Lavender God, ATTLAS has recently taken the time to share his five essential tips when it comes to production for all those up-and-comers looking to take their music-making to the next level.

Check out ATTLAS’ detailed list of production tips below.

1.Have something you want to say
I find most of my work doesn’t connect or find its legs until there’s a point to it. I often call it the thesis of the track, but it’s about knowing what it’s supposed to be when you’ve decided to turn an idea into a track. That ‘thesis’ can be about building to one massive moment, it can be about sustaining a consistent contemplative emotion, or it can be about taking the listener across some geography. Either way, I like each track to have a cohesion and a driving force that each element (writing, production, arrangement) works towards.

Read more: How No Mana layers his kicks

2. Have a main character
This goes along with the last point of thinking more cohesively about the track, but I think that a main character goes a long way in making the track work from start to finish. In a vocal track, this is usually the main lyrical and melodic content that the vocalist provides. They usher the listener through their emotional arc that peaks and valleys with the energy and arrangement of the production.

However in instrumental cases, this can vary. Sometimes the main character will be one synth or lead line that opens and closes its energy throughout the course of the track, the way the automation is played or written in, and which octaves it gets played in overtop the evolving harmonic and arrangement decisions.

In a track like ‘A Winding Path’ with Lambert, the main character isn’t locked to a specific synth or instrument, but is rather a call and response series of melodies that weave in and out of each other over the course of the track. While the instruments change, that same melodic motif shows up and its recontextualization against the wash of sounds and instruments behind it is what suggests narrative movement forward through the track.

3. Don’t try to be cool
By the time you catch up with what you think will get you booked or played out or noticed, the sound of the summer will have moved on to something else. Figure out what really matters to you and motivates you as a writer. Is it a feeling a track gave you that you want to be able to give to someone else, is music an outlet for the things your words can’t describe, is it a place where your experiences can find an emotional place of resonance?

Don’t worry too much about genre because it’s validation from a very external place. Find something inside you that needs to be expressed and don’t settle until you’ve honoured that voice with integrity and quality and uniqueness.

4. Learn an instrument
For me, it’s the quickest way to hear something in my head and to get the idea out. An instrument, and learning it to the point of being able to translate melody and chord progressions live and quickly, teaches you a lot in the process. It’s discipline, harmony, melody, arrangement all at once.

Piano is the instrument I prefer, because nothing else gives you the quick ability to play potentially ten notes at once on the creativity whim of a millisecond.

If you can hum a melody and play it live and have it in midi in real time, you are going to be able to compile an abundance of ideas that feel as fresh as the emotions that inspire them. When it comes time to build my tracks, I refer to so many digital ‘sketchpads’ of ideas, hooks, little patterns of notes, etc. all that come from recording my jam time/practice time live on an instrument.

5. Lifestyle
This is less related to production than samples or plugins or which version of Ableton had the best EQ. For me, my best writing comes when I’m balanced in body and mind. For Lavender God, every day I woke up at the same time, meditated at the same time, fasted until the same time in the afternoon, and ran long distances no matter what the weather or time of day. I was disciplined with my work time, but likewise I was disciplined with how I built my brain and body and heart into something that could tell good stories musically and honestly.

I guess this has turned a bit more into ‘how to write music’ rather than ‘how to produce a track’, but I feel that the principles of music will always be there at most people’s fingertips. The scales have always been the same, and likewise I think the principles of good EQing, compression basics, and how to apply ADSR to breathe life into a lead line are things that others could teach as well as me.

But where I feel things go beyond a track in a set are when things speak to what it means to be a person occupying a brief chunk of time on a strange planet, these are the strategies that have really let me become who I am as a writer. 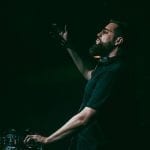 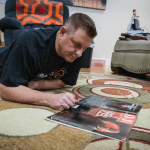 After Appearing in DJ Times, Rust-Belt DJ Becomes Talk of the Town