Miami, Fla. – Strap in, kids, because Miami Music Week is fast approaching. As usual, DJ Times will be there reporting on all the action. Additionally, from March 25-31, DJ Times will serve as media sponsor for several events, including Winter Music Conference and a series of very special, very NYC-flavored parties.

On the Party Front: New York-based promoter Benny Soto and Nervous Records will produce four nights during Miami Music Week 2019 at Wynwood’s only outdoor/rooftop venue – No 3 Social Rooftop. Each night will feature a specific brand or theme that will feature many of the world’s premier DJ talents. Located at 50 NW 24th Street in Wynwood, the No. 3 Social Rooftop parties will run from 8 p.m. to 4 a.m., and will feature the booming sounds of Global Audio Systems.

The events are as follows: 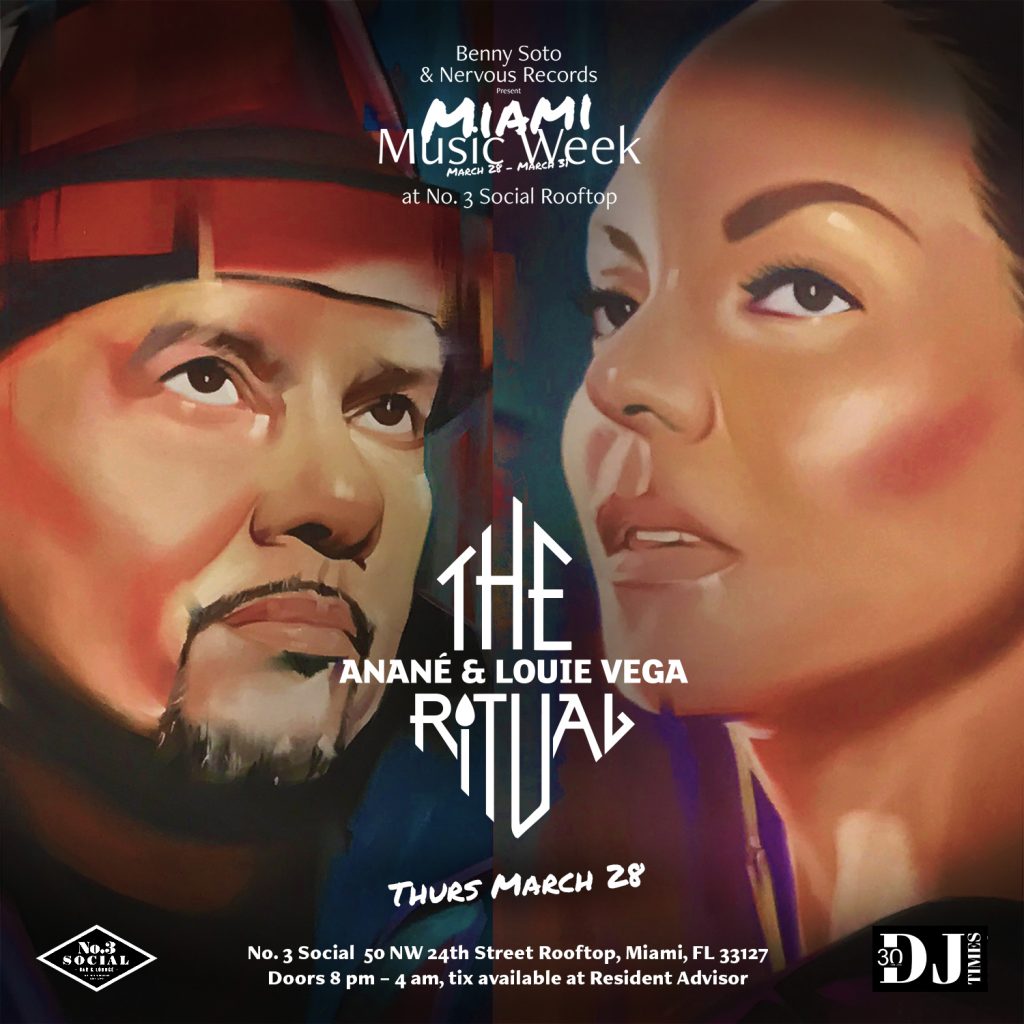 “The Ritual with Anané & Louie Vega” was the talk of the White Isle during summers 2017 and 2018 as The Ritual’s weekly residency at Heart Ibiza became the highlight of the summer clubbing season, with much anticipation for its return in 2019. Anané and Louie Vega followed that up during the fall with shows in Brooklyn at The Roof at Output and at House Of Yes that demonstrated to all the uniqueness of this event from any of the many Nightlife brands that currently flow through New York’s new club mecca. And now The Ritual is heading to Miami!

The Ritual with Anané & Louie Vega will be making a special Miami appearance on Thursday March 28, 2018 at No. 3 Social during the annual Miami Music Week. The Ritual is a special musical dancefloor experience combining the unique talents of house music maestro and Grammy Award winner Louie Vega with the internationally renowned DJ/producer/artist and Nulu Records label head Anané. Anané describes the experience: “Depending on what we play and the direction we go in musically, that is what sets the tone for the party. We feed off of each other, but we get to express ourselves individually.” Adds Louie: “The fact that I’m doing it with my life partner brings out a unique experience, and the way our music is expressed and played, the crowd feels that.” 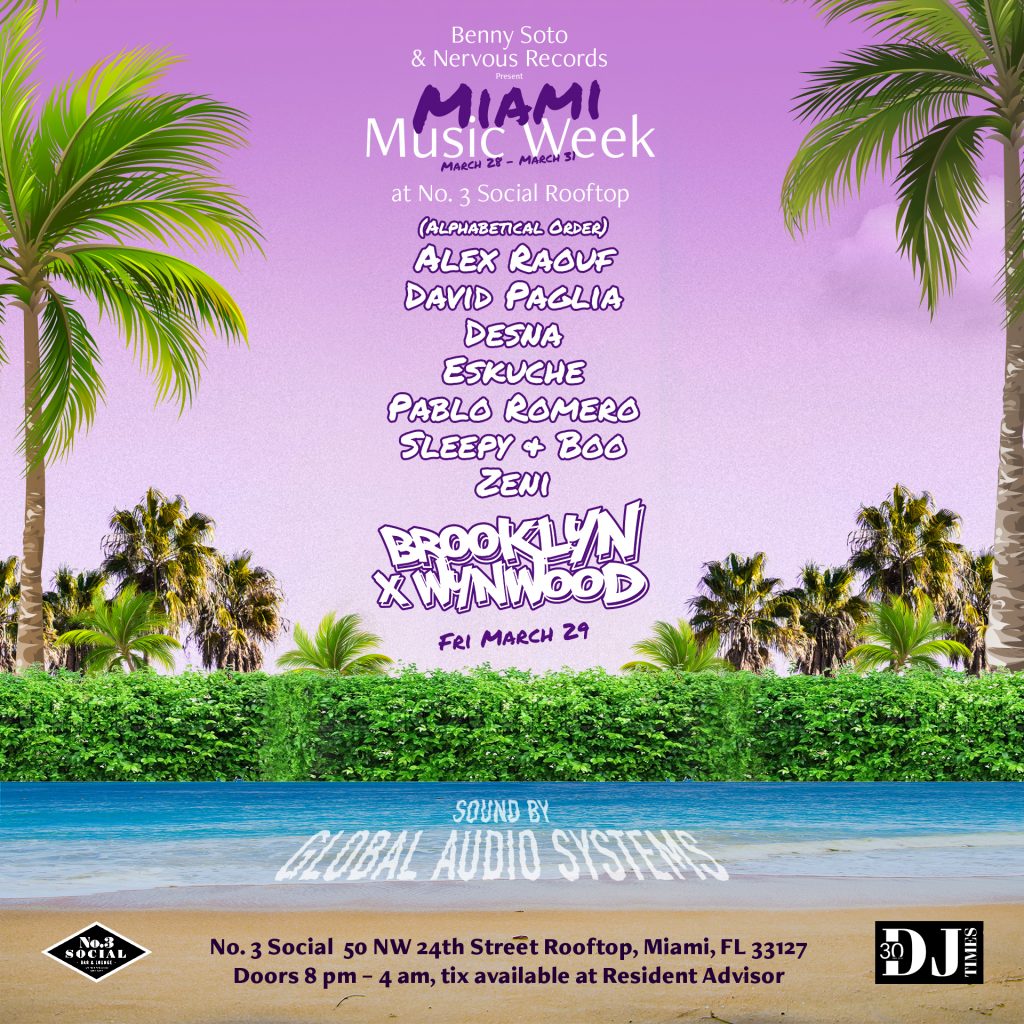 Just as Brooklyn supplanted Manhattan as the epicenter of New York’s famed nightlife community, so has Wynwood similarly emerged as the destination of choice for DJs and clubbers looking for a great nightlife experience in Miami. In celebrating the underground DJ community that has emerged in Wynwood, this event will bring together some of NYC’s finest Brooklyn-centric talent for the Friday night event. Line-up as follows: 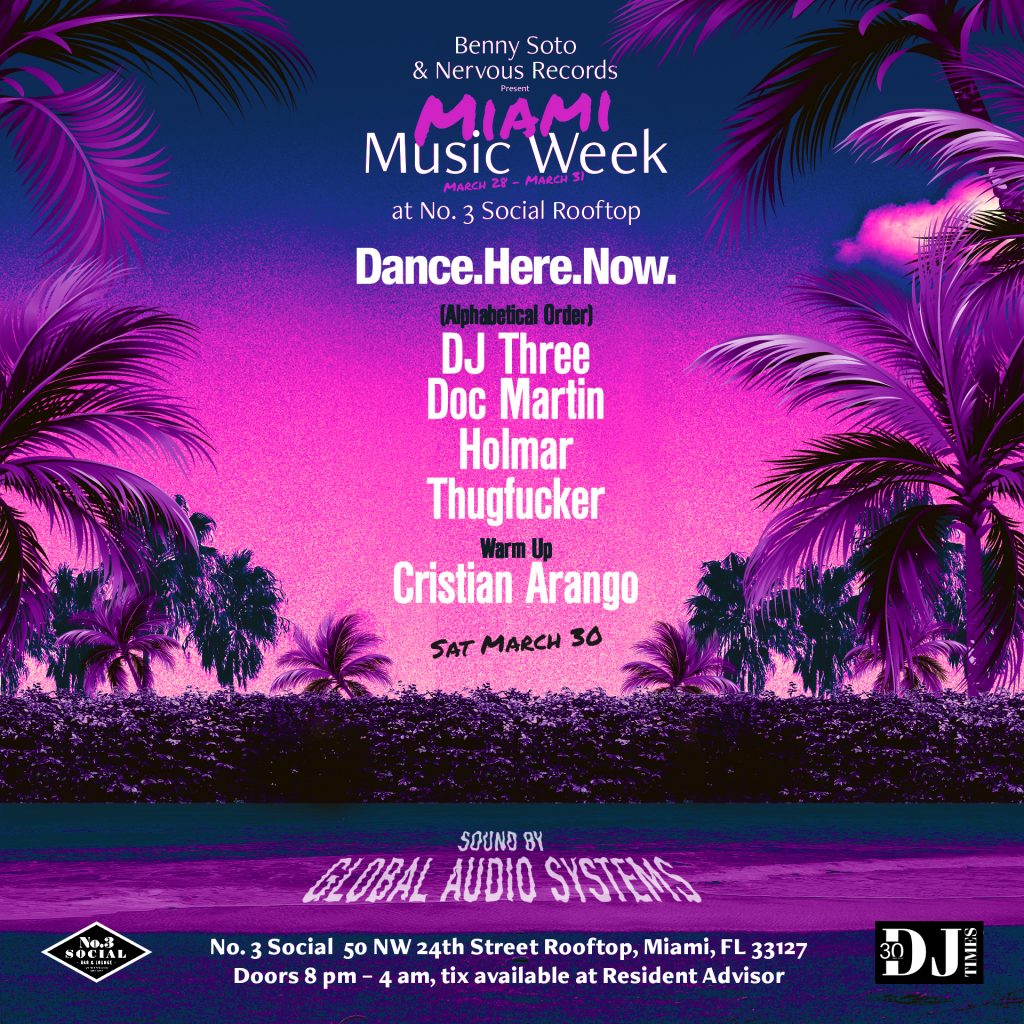 The brainchild of odd couple, and longtime friends Benny Soto and Rob Fernandez, Dance.Here.Now for over 10 years brought the best from the best of electronic music with many of the world’s elite DJs stepping behind the hallowed Cielo NYC decks to deliver their A-game within the club’s intimate confines. Across that time, it established itself as one of the premiere nights in the country, winning multiple awards (Club World Awards – Best Party 08/09, Time Out New York – Best Night, Carl Cox 09) and building a devout, diverse following of loyal nightlife veterans together with its new generation, alike. DJs like Chris Leibing, Nicole Moudaber, Victor Calderone, James Zabiela, and Sasha all graced the Dance.Here.Now. decks, emanating their patented sounds through Cielo’s pioneering Funktion-One sound system, while bona fide legends Danny Tenaglia, Carl Cox, Louie Vega and more have delighted house-heads old and new with vibe-heavy appearances.

With Cielo closing its doors for good at the end of 2018, Dance.Here.Now. in collaboration with Nervous Records, is now doing select events at new venues, and will be making its Wynwood debut during Miami Music Week 2019.  Line-up as follows: 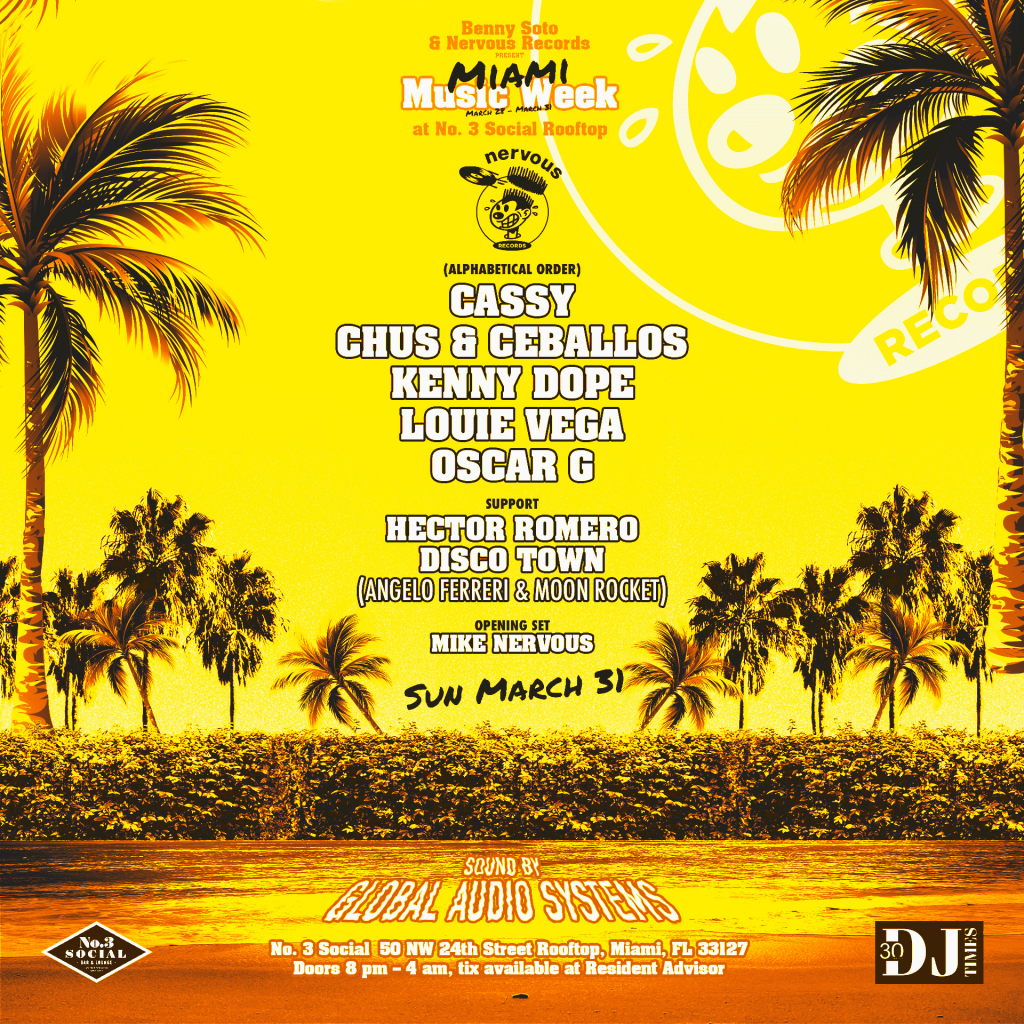 An annual Miami event celebrating the premier house-music DJs in the world, all of whom have collaborated with Nervous at some time during its 28-year history. This year’s line-up of headliners represents an astounding combination of A-list, world-renowned talents – and this special Sunday night event will very likely be the only event this year or very possibly over the next few years where you will see these constantly touring and highly sought-after artists performing at the same event: Line-up as follows:

About the Party Principals: Benny Soto has been an essential force behind several of New York’s most important nightlife institutions including the Dance.Here.Now. and 718 Sessions brands, as well as the legendary venues Output and Cielo. From his days as an assistant for Keith Haring through now when he produces events with many of the world’s elite house and techno DJs, Soto has evolved into one of the industry’s top promoter/event producers.

Nervous Records has been at the forefront of the American independent dance music community since its inception in 1991. Its catalogue includes seminal house and hip-hop recordings that are annually included in lists of the biggest tracks of all time, and its distinctive cartoon character logo represents for club fans worldwide the best in underground music and culture. The label continues to release singles and albums in the still-growing genre of house music, and in the past few years Nervous has partnered with Benny Soto to also produce many successful nightlife events. 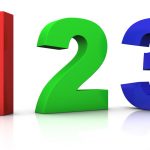 A 3-Step Plan to Boost Your Bottom Line — Now 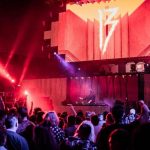